Earlier this year encrypted communications firm Silent Circle and Spanish Smartphone makerGeeksphone announced a privacy-focused encrypted Smartphone called 'Blackphone' and today the company has revealed it as 'Mobile World Congress' in Barcelona.
The Blackphone titled as, “world’s first Smartphone which places privacy and control directly in the hands of its users,” has a fully customized version customized version of Android called PrivatOS and pre-installed with lots of privacy-enabled applications, is now available for pre-order for about $629.Silent Circle was co-founded by a respected Cryptographer Phil Zimmermann, best known as the creator of Pretty Good Privacy (PGP), which is a widely used email encryption software.
The Blackphone handsets main focus is keeping all of your data secure, and to stop government agencies snooping on your communications. Blackphone will come with a set of application developed by Silent Circle, including Silent Phone, Silent Text, and Silent Contacts as well as other features for firewall and remote wipe when required. 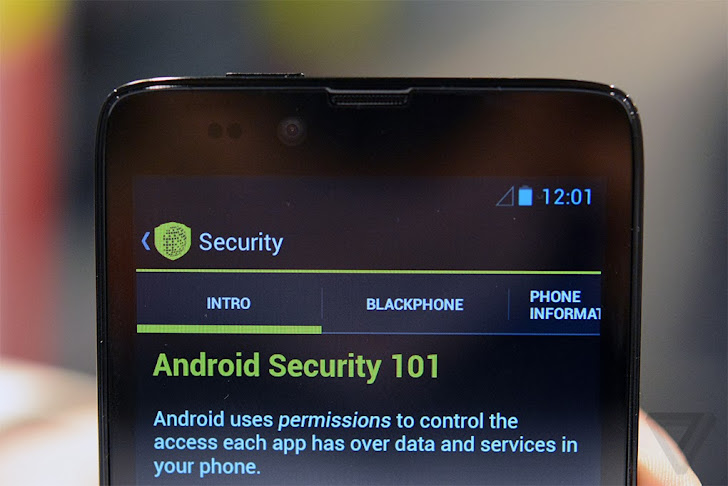 Blackphone also has a 'Kismet Smart Wi-Fi Manager' to improve the security device on public networks, and also provides the private web browsing and secure file-sharing options. The Android-based Blackphone is powered by a quad-core 2 GHz processor, 2GB of RAM, 16GB of onboard storage and support for LTE networks.The Blackphone also comes with SpiderOak, which provides 5GB of encrypted data backup, and Virtual Private Network from Disconnect.me.But if you think 'Blackphone' is a shield against the NSA or other intelligence agencies Blackphone, then you should know this - Blackphone cannot mask metadata entirely from NSA. No piece of man-made technology is entirely hack-proof.

Mike Janke, co-founder and CEO of Silent Circle told Mashable, "If you are on the terrorist wanted list or a criminal, intelligence services will get into your device... There's no such thing as 100% secure phone."The Blackphone’s main security feature is voice and text encryption, not about hiding metadata which is related to a communication data such as date, time, location and identity of the users.
http://thehackernews.com/2014/02/silent-circles-blackphone-privacy-and.html
Posted by Unknown at 8:39 PM