According to the classic film “It’s a Wonderful Life,” an angel gets its wings every time a bell rings. The modern-day corollary is that a customer loses his or her credit card data every time a programmer introduces an application security flaw into code.


Don’t be fooled by the severity or scope of the problem because of the quaint comparison: Half a billion records were compromised in 2013, according to the recently issued 2014 IBM X-Force Threat Intelligence Quarterly. Take a look at the graphic depicting publicly disclosed information compromises since 2011.
If you unfocus your vision and look at the graphic as you did those Magic Eye pictures that were popular in the 90s, you’ll notice that the number of incidents increased from 2009 through the end of 2012 and persisted through 2013. A few other observations that stand out are the following:
What’s not called out specifically in the graphic is that there has been an almost threefold increase in Java vulnerabilities since 2012. This isn’t surprising since Java gives attackers the opportunity to create cross-platform exploits — write once, deploy everywhere. We wrote about cross-platform exploits in the X-Force 2013 Mid-Year Threat and Risk Report: Attackers are optimizing their return on investment through operational sophistication rather than technological sophistication.
I gave a presentation on this topic at dev@Pulse (a side conference of IBM’s Pulse conference) to the developers in attendance. They were having a grand time learning how to program Raspberry Pis to control toy cars through a mobile app, among other fun projects; then I ruined the mood by talking aboutapplication security.

Costs of a Breach: The Inconvenient Truth 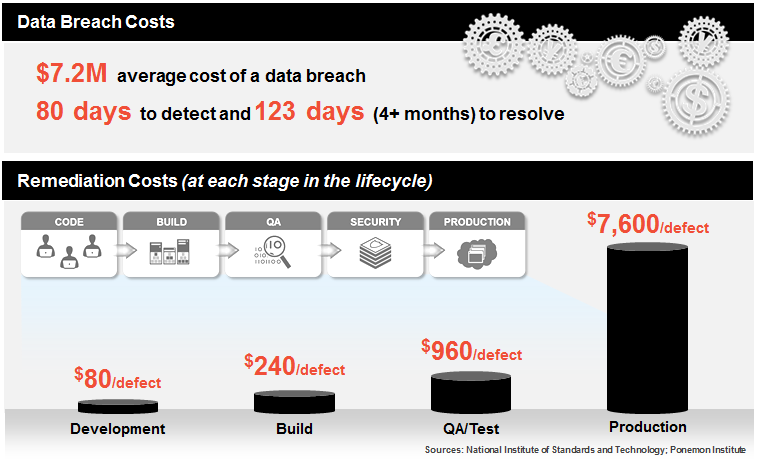 I hate to be the buzzkill, but we could save a ton of grief by finding security flaws in the development process, not to mention the fact that it saves our organizations tremendous amounts of money. When you look at the cost of fixing functional defects, it’s almost 100 times more expensive to correct them in production than in development. When you add in the costs of a security breach to the business, it skyrockets to $7.2 million — increasing by almost 9,000 times — due to:

I realize that it’s easy to be an armchair quarterback — or Scrum Master, as the case may be — and thateliminating security defects is an unreasonable expectation, but we can eliminate 80 percent of the consequences by simply focusing on a few tactics. With that in mind, here are my top five development practices to reduce the application threat surface:
Note that both steps 2 and 3 are specific to Web-based applications. Strong security practices should be applied to traditional server or workstation applications as well as mobile apps, but let’s prioritize the areas in which the compromises are happening today.
In the final analysis, we have the knowledge and technology to prevent the most common vulnerabilities from finding their way into our code. When integrated with up-to-date threat intelligence, organizations can prioritize their efforts based on contextual risk: What is the severity of the vulnerability, what is the value of the data to the business, what is the exposure to attacks and what mitigation controls are already in place? Let’s make it a goal to eliminate SQLi and XSS/XSRF vulnerabilities from enterprise applications; then we can work on the next attack vector, and the next, until we make it so expensive for the bad guys that they move on to something more lucrative — such as stealing from each other.
http://securityintelligence.com/improve-application-security-immediately-with-these-5-software-development-practices/
Posted by Unknown at 9:36 PM